-Weekly Schedule With An 8 Month Old-

As of term 4 I decided to organise my week to include an activity on almost every day, most of which was organised before my son who is now 11 months decided that he would start walking at 8 months old.

Here’s a little run down of my week that I had planned out and my experiences with each of them. 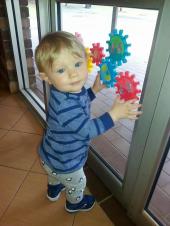 We had a trial of the Gardens playgroup held at Central garden Merrylands and the end of term 3. I liked the convenient location, and that I was halfway between mine and mums house, so would sometimes go there after for lunch. Olly spends most of his time walking laps around the room stopping to pick up things to put in his mouth (fun I know) and soon started wanting to push everything around (prams are for boys too right?). The fees were reasonable and everyone was quite friendly, I was surprised in the demographic of mums and bubs that were there actually. We have now seen out the year and are looking forward to joining everyone again in the new year.

So Tuesdays involve Oma (Christie’s Mum) coming over early to take care of Olly so mummy can go to coaching for a few hours. Many of these days involved Olly joining us in bed during some times in the night, and mummy trying not to wake him as she got up. Most times he only lasted 5 minutes and then he was up, and to distract him from mummy leaving Oma would take him back in his room and change his nappy. The rest of the day would either involve me covering a few times at my other work or our usual of heading to the shops to get some groceries. A pretty cruisey day most of the time with lots of help from Oma and Omi (Christie’s Grandma).

I had already been attending Baby sensory class at North Rocks for the previous term, and were continuing this into term 4, what a big mistake this was. But I had already booked and paid for the new term before Olly was walking, so was committed to attend. Most of the class would consist of Olly getting up and wondering over to the toys area and me slowly following him before picking him up to bring him back to the group for the next song. He enjoyed the activities, but just couldn’t sit still and wait between each one. The structure of the classes was really great and there were some great ideas that we enjoy doing at home aswell. This class is now over for the term and we will be too old to participate in the new year anyway (what a shame lol).

For those who haven’t heard of this before, kanga training is exercise classes for mum where she uses a carrier to carry her baby and perform danced routine exercises (in the hopes of losing that mum tum lol). This was pretty much the only form of exercise I was doing at the time (after a few failed attempts to restart at the gym). Olly enjoyed the part where we did our floor activities in the first part of the class. He would wonder around and come see me every now and again and grab my hair, or try to hump me all good. Then when It came time to get in the carrier he only protested a little bit, and once he was in it was ok as long as I kept moving, even between songs. He usually had

enough by stretch time so would let him out and have a little run around. I think his favourite part was when it was over as our instructor would give out bananas and I got to share mine with him. I am still undecided if we will continue this into the new year. I may try him in the carrier a few times over the holidays and see how he goes before deciding

Then as summer was approaching I thought a little bit of water awareness would come in handy. I had never really dealt with a baby in a pool before so was as much as a learning experience for me as it was for Olly. He was a natural loved the water, enjoyed watching the other older kids more than me, and constantly was trying to get away from me (and im like dude you will drown). After a couple weeks, I could pretty much teach the class, singing sounds and splashing them etc was pretty easy, but we had already paid for the 12 week block so we would continue to go anyway. A few weeks in and the sickness started to hit, running nose, coughing etc. he would just get better and then after swimming again, he was sick again. We missed a few lessons and decided that we wouldn’t be renewing the next term. Which was my plan anyway, as Omi has a pool we were just preparing ourselves for that to be ready come summer. Olly is getting a few swim aids for Christmas and we look forward to using them in the weeks to come to enjoy our summers in the water.

I’m looking forward to a little less structured 2018 with a lot of adventures to new parks and playgrounds and exploring this beautiful country of ours with some of our friends.