Yesterday’s total step count reached 12,357. 5,357 steps more than my minimum goal of 7000 steps! Coaching certainly helped boost the amount of steps I did that day.

We have now reached the end of day two.

Today and last night certainly was a realistic kind of day as a parent- ‘Mum life’. After a smooth sailing easy kind of day yesterday, we followed it up with a shocker in the way of sleeping last night. When I woke this morning it was all a bit of a blur as to what hours and how many times we ended up having to get up. My daughter is teething at the moment. Third tooth has cut through, and she seem to have the worlds slowest teeth at coming up. But we definitely have three in there and possibly number four on the way also. No wonder the poor thing is a bit wild and woolly lately at times.

Up until Easter time we were sleeping through 9 pm-7 am. Since Easter we are on random sleep patterns. Some nights we wake up 1-3 times, other nights she will sleep all the way through. The randomness of her sleep pattern is what kills me at the moment, as I assume I’ll see her in the morning then I get a surprise wake up.

I went to bed last night with a cracker of a headache. So having to wake up a number of times didn’t help the headache. Thankfully my partner was amazing and helped with the wake ups trying to get her back to sleep. When I woke this morning I was tired, sore from our walk and adventures, my neck was sore from poor posture/headache and I was not motivated to do anything.

Before having my Garmin, today definitely would have been a  stay at home day, a ‘lazy day’.

After a shocker of a night, and with the teething, my almost 8 month old daughter was grizzly and cranky and upset all morning. I spent the morning comforting her, feeding her, trying to get myself showered, and things done around the house. By 11.30 am I had only done 632 steps….. How was I going to achieve my 7000 step goal?

By 12 pm I had not even done 1000 steps- I was at 912 steps for the morning. So this goes to show, that this is what a normal home day for us looks like if we didn’t go out and walk, how little steps I actually do when I’m just at home.

I finally got showered, between the crying, cuddles and feeds and got ready to head out for an adventure and a walk to get some steps up. I walked into Parramatta to grab some snacks from the shops for a little picnic in the park then set off on our walk to the playground. 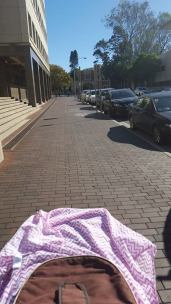 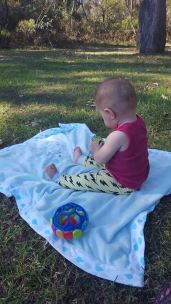 First stop, playground number one. We set up camp at the first playground and had a bit of a play in the grass with some toys, then ate some food. I had dip, crackers, cheese and cashew nuts. My daughter had spinach, apple, broccoli and pea.. with a side of leaves, sticks and her bib (teething means we chew on anything we can put in our mouth, and bibs feel good on her gums/teeth.. apparently !!).

Through out our walk I recon I put on her hat at least 10 times, and about 2-5 sec after she had pulled it off again. There goes hats, headbands, beanies etc for awhile until we can teach her to leave them on again. Any one have good suggestions in how to keep their hat on? 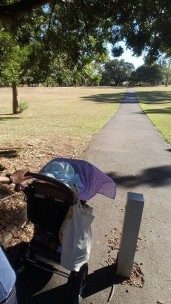 I ran up the hill, walked along the road path, past the playground, around the pond and back to the playground. We looked at the birds as we went past. There were so many of them eating and hanging out on the grass. 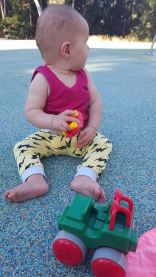 Once we got to the playground we played on the trampoline, and other playground equipment, watched the other kids play, rolled around on the ground, played with our cars, and played with our ball. Bouncing, rolling, stopping the ball. After the playground it was nearly feed time so we set off on our walk to find a nice shady spot under a tree near the pond. By this stage I was on about 3500 steps. I felt like I had walked a fair way. While pushing the pram the accuracy of the step count may be a bit out, but its main goal is to motivate me to get up and get outside and move. So it was doing exactly that!

After her feed we had a look at the ducks and birds in the pond then set off on our way home via the river.

By the time we got home according to Google maps I’d clocked up 7.17 km and my Garmin told me I had taken 7075 steps. Day two hit the target goal again with more hours left in the day! YAY!!!

One thing I am really loving about the Garmin is it tells me when I have been sitting down for too long, a red line slowly builds up over the screen eventually beeping when its time to get up and move again. Tonight I found myself running laps around the couch and doing star jumps when it started to beep at me. This made my daughter smile. She was probably thinking “what is this crazy women doing??”

After just two days of using my Garmin, I’ve seen positive effects on how it has changed my mentality towards keeping active. It’s a great motivation, and is really interesting to look at the stats of your sleep also. Last night had many spikes of restlessness ( due to getting up multiple times).

I wonder how tonight will go, and what tomorrow will look like!

By Clare at Relaxed Parenting Blog