My experiences with Brody’s food allergies

Thank you for the opportunity to share my experience with food allergies and how this has affected Brody’s transition into toddlerhood.

Pretty soon after Brody was born he was diagnosed with severe reflux. He was slow to take to breastfeeding and constantly regurgitating his feeds. He was always wanting to feed and would latch on but would be on and off and fussing all the through the feed. In those early weeks and months, it would take literally hours to get a feed into him. Being my first, and with nothing to compare it to it was hard to realise what was actually wrong. I mentioned it to numerous GP’s and maternal Health Nurses and was told he’s a baby, that’s what babies do, they vomit if you haven’t burped them enough or if you are over feeding them. I knew there was more to it and when we saw a paediatrician they diagnosed reflux.

We started him on reflux meds which helped a bit, but I still felt something was ‘off’. He was born a very healthy weight of over 4 kilos, nearly 9 pounds but wasn’t putting on as much weight as he should have been. Once we got to 5 months and started introducing food, it became worse and he was losing weight every week. We began with the introduction of simple baby type foods. Puree apple and pear, banana, carrot, pumpkin etc. some foods were fine and others caused instant projectile vomiting accompanied with little red dots all around his mouth.

We were told it could be an intolerance to certain foods, and to start right back at the beginning with foods, one food per week and keep a diary of his reactions. So that’s what I did, but I just couldn’t figure out which foods were causing the issues. During all this Brody’s weight continued to fall and I was beyond worried about him.

In all other areas he was doing beautifully. He was meeting all his milestones on schedule or even earlier and was a happy giggly sociable little baby.

It felt like Brody had every test under the sun to find out what was going on. He had ultra sounds of his tummy, he had numerous examinations, his throat was looked at, he had to swallow special liquid to see how it travelled through his body, everything came back fine. It didn’t seem to matter what foods I gave Brody he would get sick from them. For example, I knew he was fine with pear so I’d give him a little bowl of pear puree, he would seem fine and then later on he’d start vomiting and break out in hives.

It got to the point where he started to not want to eat at all as he was associating food and eating with being sick. What I didn’t know at that time was the number of foods he was allergic to that I was eating and it was being passed through my breastmilk. That was what was making it so difficult to determine which foods he couldn’t have. 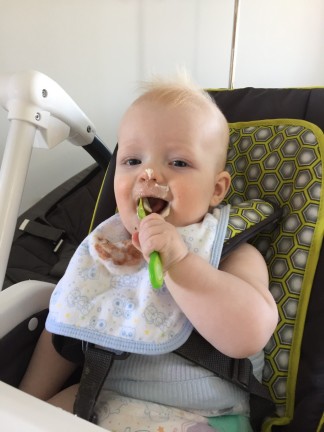 Feeding times became really hard. He would cry and get really upset when I’d try to put him in the high chair. He’d fuss and wave his arms in front of his face and clamp his mouth shut, it became so hard to get any food into him. He got by on breastmilk, puree apple, pear and carrot. It was hard seeing babies of the same age enjoying biscuits and toast and self-feeding and having fun exploring with different foods. I know you shouldn’t compare to other babies but you can’t help but wish your baby would pick up a chip or any food and want to eat it.

I stopped feeding him in his high chair, just offered him food while sitting on my lap, we played games and sang etc. to keep meal times happy and light. When he was finally old enough to have the allergy testing done we were really surprised to find the number of foods he was reacting to.

He’s allergic to milk, anything containing diary, so anything that has egg, cream, butter, cheese, yoghurt etc. He’s allergic to soy, to peas, beans, broccoli. He’s allergic to tomatoes, banana, avocado, kiwi fruit, watermelon, grapes, strawberries, apricots and peaches. Finding foods to feed Brody is difficult, once you start reading packets you realise that the above ingredients are in just about everything. Many milk free products use soy, often the milk and soy free stuff contains pea flour. Even something as simple as bread he can’t have. The list just goes on and on! I had to eliminate these foods from my diet as well, as it was being passed through my breastmilk.

Peas, tomatoes and chocolate are my staples so I found that hard! But to finally have some answers and know it was helping Brody I would have given up everything! I considered stopping breast feeding, there is a type of prescription formula that he can have but he just wouldn’t take to it. I tried doing it gradually and mixing expressed breast milk with a little of the formula, but he wasn’t having a bar of it! Even just 5 mls of formula mixed in with 100 mls of breast milk and he would scream and cry and refuse to drink it. I tried everything! Even adding vanilla essence but I had no luck.

It became too stressful and I eventually just gave up on that idea and that’s why we are still breastfeeding. Now that we know which foods to avoid it’s a lot simpler. He has a diet of breastmilk, apple, pear, pumpkin, carrot, corn, chicken, rice cakes and potatoes. He can have hot chips and hash browns as long as the oil used was rice bran oil. So still fairly limited but we have come a long way!

We are definitely behind when it comes to feeding, he had several months of gut rest where he had no food at all so that set us back a bit. He has purees and really soft mushy things. Hot chips are broken up into tiny pieces. He has just recently got his bottom molar on one side so I’m hoping that will help with chewing and he will be able to tackle bigger chunks of food. 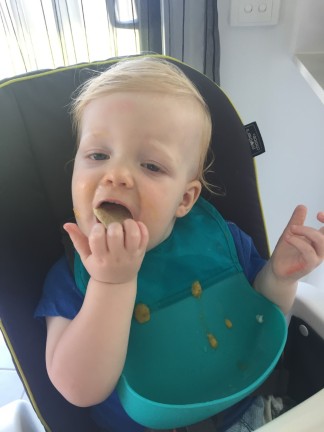 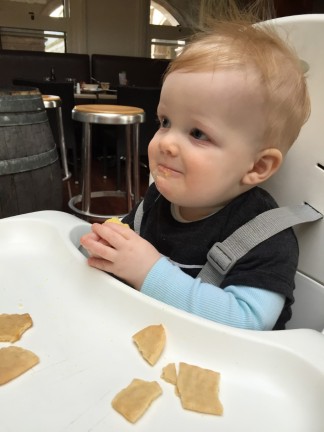 I was worried about the food issues causing speech delays but that certainly hasn’t been the case with Brody. He began saying words pretty early on and it a very chatty toddler. He puts 2 and 3 words together and learns more all the time. His latest is “no that’s yuck” and he likes to say that to everything. Lol!

I am a school teacher and I had to return to work in January. Brody started Child Care and it has definitely been my biggest challenge. I thought his food challenges were hard, but this is much harder! I always knew I would struggle leaving him but I wasn’t prepared for just how hard I have found it. Brody has not settled there making it that much harder. He won’t eat, wont drink, wont nap and spends most of the day upset. The child care staff assure me he is getting better with settling and it’s just an adjustment period. Some children take a while to feel happy in a new environment.

The fact he goes literally 9 hours on nothing is a big worry. And once again, I’m watching him lose weight. I give him a big breakfast, and a good snack as soon as we get home and then I can squeeze in another meal right before bedtime but overall it’s still not enough calories in a day. This means he’s waking during the night hungry, he’s overtired and it’s a cycle we can’t seem to break. As a mum it is tough as you want the best for your baby and it is hard to trust anyone else with that responsibility, I must be driving the child care staff nuts with my questions and constantly checking where they have his epi pen etc. I keep reminding myself it will get easier, he will settle, probably end up loving it and possibly even grow out of some of his allergies.

I think it is super important to make the most of the time when you are with your baby and soak in all the baby cuddles and play time you can. I have been very fortunate that through the millions of vomits and countless spots and hives I have a happy gorgeous toddler. And I have learnt that a mother’s intuition is always right. If you feel there is something not right, then speak up for your baby. You are their voice. Get as many opinions as you can, change doctors until you find one that listens to what you are saying and most importantly trust your gut! Being a mama is a special privilege and you’re a mama for a reason.