It may not come across in print, but those who know me best will tell you I have something of a stubborn streak.  I’m working on it.  But it often rears its ugly head in situations that actually do not matter at all, for example my own estimated due date differing from the midwife’s by a few days.  In both my pregnancies it has happened and both times I have clung vehemently to my own calculations.  Because obviously four or five days really matters.  Eye roll.  Yet I can’t let it go.

So in case you wondered, the following account of Taavi’s birth happened two days after my own estimated due date and one day before the date on my medical records.  Not that you or anyone cares, except I simply don’t know what to say when people ask if he was early or late.  “Well… both.”

But when you’re that cute, who really cares?

And now, without further ado:

After two weeks of cramps, back pain, Braxton Hicks, loss of mucus plug, and general crabbiness, I woke up at 4 a.m. on May 20th thinking, “hmm… but probably not”.  I half-heartedly began timing anyway, my third early morning that week to do so.  Not much seemed different: no notable intervals and no real strength behind the sensations.

I noticed Eric’s side of the bed was empty (a regular occurrence, insomnia be damned) so after awhile I shuffled my beluga body downstairs to deliver the non-report.  “I thought maybe labor was starting, but looks like it’s nothing.  I’m filling you in anyway because I know how deeply it pains you to not be informed of every single discomfort I experience.”

He said something appropriately sympathetic and I shuffled back to bed.  Almost immediately, my inner antennae perked up.  Now that was something.

When Eric came back to bed about 15 minutes later I let him lay down, unsuspecting, for a moment before I softly whispered the exciting news that this was indeed the real thing.  We reveled in the sweetness of it together and talked about names one last time.  At this point the other front runners were Toviel {‘my God is goodness’, Hebrew of Tobias- whose story is so beautiful!}, Nico {‘victory of the people’ + I’ve always loved saucy St. Nicholas}, and Theodore {‘gracious gift’}.  But yes, we agreed once and for all, Taavi is his name because more than anything we want his identity to be “dearly loved”.

As contractions started to ramp up Eric began making phone calls to our parents, who were both in hotels, and to the hospital.  By the time my parents arrived at our house to stay with the boys we were just gathering the last of our things and my contractions were about 4 minutes apart and increasing in strength.  Because I felt confident about the support at our hospital for intervention-free births, we decided to go ahead and head up there rather than labor longer at home.  It was about 5:30 a.m. 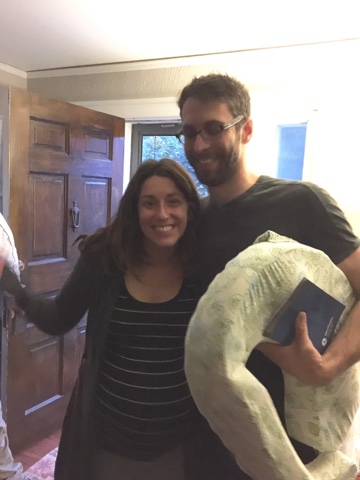 My dad snapped this photo before driving us the few blocks to the hospital, and what on earth is wrong with my eyes?  Am I in labor or did I get stung by a bee? I don’t even know.
After the initial intake was said and done my midwife checked me at about 7 a.m. and declared me to be 6.5 cm dilated! Woo-hoo we were rollin’.  Still, I knew based on myextensive birthing experience (ahem. once.) that dilation would go slowly and we had hours ahead of us yet.  So in between contractions Eric and I settled in to feather our nest: setting up the lavender oil diffuser, unpacking heating pads, me dreaming about the point at which I would slither into the warm tub (with jets!) and reminding myself to request a birthing ball at some point.
In recent months I had felt the need/desire to prepare for labor differently this time around, so I had had my nose in Ina May’s Guide to Childbirth

for the 6 weeks prior.  So during contractions I focused on relaxing my body and letting the contractions do their work rather than allow my tension to slow it down. In particular, I intentionally relaxed my jaw which in turn relaxes the other sphincters as well. I also found it super helpful to wrap my arms around Eric’s neck and hang on him through contractions: it forced my body into a relaxed posture and made the sensations so much more bearable.

Moses had been face-up, so his labor and been almost entirely in my back with none of the relief of the ebb and flow of uterine contractions.  It was pretty much just constant pain after a certain point.  So THIS! Pain for 1 minute and then a 3 minute break?! That felt like the greatest of luxuries in comparison.
Not long after she had checked me, I vomited.  I was thrilled, not just because I felt much better, but because I knew it meant I was transitioning.  As the contractions picked up intensity, Eric pulled out the list of names I had tucked in to our hospital bag: women I love who are facing infertility, secondary infertility, miscarriage, and infant loss.  During times of pain, he stood by my side and quietly read their names out loud. I let my body be a prayer for these women I love, asked my Lord to let my suffering somehow alleviate their own.
The next time she checked me (around 8 a.m.) she declared me to be over 9.5 cm.  One more contraction should do it, she said, and after that I could just push when I felt ready.
Eric and I looked at each other and -scout’s honor!- laughed. After the long and agonizing labor two years ago (when I’m pretty sure Eric had begun to wonder if he had accidentally married Gollum), we had fervently hoped that this one would be different. And I had felt optimistic about that because not only did I now have a notch in my birthing belt, but I felt better about the way I had prepared for it. But still.  It’s childbirth.  How often are you really surprised by the mildness of it?

My water had still not broken, so my midwife broke it right before I began pushing.  It took me awhile to really feel a groove with the pushing, but once things ramped up I was hoping against hope that it would be one of those “just two pushes and he was out!” stories.  The pushing stage of Moses’ birth was by far the most discouraging part for me (sunny side up + oddly angled resulting in 3.5 hours of effort and ending in an episiotomy), and I soon came to realize that I had some major mental hang-ups from it.
One thing I knew I wanted to do differently in this birth was to try different positions for pushing. I briefly thought about trying a squat as I had planned but instinctively knew that didn’t feel right.  I got on my hands and knees for a bit but that position created a pain in my hips that was unbearable.  I had Eric push on my hips with all his strength during contractions, which helped a lot, and baby did lower during that time, but the midwife suggested that a back position would alleviate the pain.  She was right, so I ended up delivering him in a sit/lay angle with my knees pulled up.
And I have now lost the two males who were attempting to read this.
Anyway, after over an hour I started in on a quasi-panic.  I can’t do it. I can’t push him out on my own, I need an episiotomy.  It wasn’t true, of course, but how much of childbirth is a battle against our minds?  He was actually in a great position and was making progress downward with every push.  But the pain and the passing time were trying to convince me otherwise.  Eric remembered that I had wanted a mirror to see our baby enter the world, so the nurse quickly found one in the room and he held it up for me.  My wonderful midwife gently asked if I would like to feel his head, which I did.  I still think being able to see and feel how very close I was to holding my child was what gave me the strength to get him out.
But I’m ahead of myself.  First I touched the brink of despair, my body burning for what seemed like half an hour as his head stubbornly refused to emerge and I stubbornly refused to let it retreat.  I put words to my fears, said them out loud to the midwife, to the (precious) nurse, to my husband, to myself.  I’m afraid I can’t do it on my own. He’s stuck, he’s stuck just like Moses, I know it.  They wouldn’t hear of it, wouldn’t let me believe it for a second.  The midwife explained that the scar tissue was simply not as stretchy as normal skin would be, but that progress was constantly being made with every push.  Just get him out! I begged at one point.  My midwife laughed, “you get him out!”.
So finally, I did. 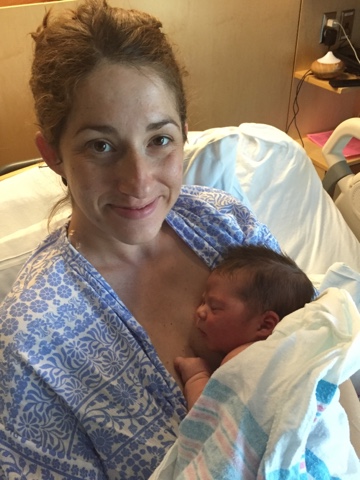 They put him on me immediately and let us snuggle for as long as our hearts desired.  When they finally weighed him: 9 pounds, 6 ounces.  Holy smokes, I’ve never felt so validated.

Taavi Ross Evans, you are so very very loved. Thanks for coming out.
And P.S. – I’m so glad you’re a boy.  You are exactly what was missing.